Just Peace, A Message of Hope

Not long after posting this book review to my website, i received a wonderful, warm email from Jeni Stepanek thanking me for posting the book review of her son's book. 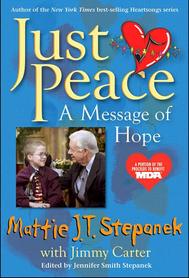 I will be buying a number of his books to share with family and friends. Take time to read his book, buy it, get it from the library, or pick it up in a bookstore, and read through his essays. You, too, may decide this book needs to be read and shared with family, young teenagers, and adults, as I have. I believe each of us can gain from Mattie’s writings.

Always, when I think of Mattie, I see his smile and the sparkle in his eyes….

What is your “Heartsong?” If Mattie could identify his “Heartsong” at the age of five, then your purpose, your essence, if not presently known, is waiting to be acknowledged and shared.

Mattie’s life philosophy was, “Remember to play after every storm!”

We also need to remember Mattie’s wise words, “Peace is possible. It can begin simply, over a game of chess and a cup of tea.”

I just finished reading one of the most profound and inspirational books I have ever read. I don’t know if any of you had the privilege of encountering young Mattie on his numerous television appearances on Oprah, Good Morning America, Larry King, or the Jerry Lewis M.D. Telethon, but if you did, or did not, I invite you to read this book by this best-selling young poet, peacemaker and philosopher. Mattie J.T. Stepanek died in June, 2004, weeks before his 14th birthday. I have all his previous poetry books, but this book goes far beyond his poetry, with brilliant essays, and email correspondence with his hero, President Jimmy Carter. His essays are incredible, filled with wisdom and insights that hardly seem possible coming from such a young mind.

The book is profound partly because Mattie J. T. Stepanek began writing poetry at the age of three, and by age five he called his poetry “Heartsongs.” When he was five years of age, he described Heartsongs as an inner message, a person’s inner beauty and reason for being. Mattie writes: “A Heartsong tells you what you are meant to do, to be, in life. Whatever it is that we feel we need and want most in life, well, that is what we are called to offer others. That is our Heartsong. I seek hope and peace. I seek happiness. I see love around the world.”

Mattie believed that everyone in the world has their own Heartsong. He states, “No two Heartsongs are exactly alike, because they represent our spirit, our essence….No single Heartsong is better, or more important, or more worthy than any other Heartsong. And the beauty of Heartsongs is when they are realized, and shared with others.”

He knew at the age of five what his life purpose was, and also knew his life would not be long and understood the illness that would challenge him, day in and day out. Despite those challenges, he earned a Martial Arts Black Belt in Korean Hapkido at age nine. At nine, he was taking high school classes and soon enrolled in college classes. And from birth, he was fighting a disease, dysautonomic mitochondrial myopathy, a rare and fatal form of muscular dystrophy, the same disease from which his older three siblings died. His mother, Jeni, was diagnosed with the adult onset of the disease after her four children were born, leading to the understanding by doctors of what had killed her two oldest children, and soon after, her third child. Mattie was not expected to live long, but over the years he came close to death several times, spending months at a time in Intensive Care in the hospital. He lived way beyond doctors’ expectations, and much longer than any other child with the disease. Jeni has been confined to a wheelchair for several years and even though her disease will likely shorten her life, it is not quite as devastating to the body as was her children’s form of the disease.

At one point, in 2001, when it was believed that Mattie’s death was imminent, he was asked by medical professionals what three wishes he had, in the hopes that at least one of his wishes could be fulfilled before his impending death. As his mother states, his three wishes response was not typical of a dying child.

“I wish to have at least one of my collections of Heartsongs poetry published as my gift to the world. I wish to have Oprah Winfrey share the message of hope and peace in my Heartsongs on her show because people turn to her for inspiration and direction. And, I wish to have fifteen minutes to talk peace with Jimmy Carter so that I can make sure I am doing all that I can and should be doing to become a peacemaker for others.”

All three wishes came to be.

His meeting with former President Jimmy Carter resulted in an ongoing intimate relationship, by telephone and email, sharing thoughts on peace, war, and life and death. He asked Jimmy Carter to help him with the new book he wanted to write, Just Peace. Mattie states the purpose of his book was to “offer insights on why conflict and violence exist in a world filled with people generally and genuinely good, and to explore the potential impact and current justification of war in modern society.” It was Mattie’s plan for the book to interview others who were endeavoring to seek peace and justice for individuals or groups of people around the world. His remaining time did not allow for those interviews to take place. He passionately insisted in his days before death that his Mom, Jeni, promise to publish what he had completed on the book, which were several essays on peace, 9-11 and terrorists, violence and war, religion and spirituality, diversity, the environment, the world situation, along with the email exchange of ideas with Carter.

Mattie wrote these words: “I believe that I am here to reach out and touch the world gently with my thoughts and my experiences, and with my observations and my reactions, to help people more fully appreciate and respect all aspects of life. I believe that I am here, even if only for a few handful of years, to help people consider the important matter of future, during our lifetime, and for eternity.”

His essays are profound and I find I cannot even put into words the value of his work, except to say it has to be shared. You may think, "Oh, this is a kid, what can he know."  Trust me, his writing is beautiful, his philosophy profound, insightful, and filled with a wisdom far, far, beyond his age. His legacy is a gift for humanity, and those of us who did encounter Mattie will never forget this special angel, a messenger of peace, and those who now read his book, will also remember.

Jimmy Carter delivered a eulogy for Mattie at his funeral service, June 28, 2004, and said, “When I was running for governor a number of years ago, my wife and I didn’t have much money, so we traveled around the state and we estimated later that we shook hands personally with 600,000 people.”

“Later I ran for president, as some of you will remember, and campaigned in all fifty states. Subsequently, I traveled around the world. In fact, since I left the White House, my wife and I have been to more than 120 nations. And we have known kings and queens, and we’ve known presidents and prime ministers, but the most extraordinary person whom I have ever known in my life is Mattie Stepanek.”

And as I have previously written to Jeni, I again, say, “Thank you, Jeni, for bringing this beautiful child into the world and sharing him with us.” And my thanks to Jimmy Carter for being there for Mattie and so lovingly sharing in Mattie’s passion and dedication to peace.

When Mattie was asked who his favorite authors and poets were, he stated, “My favorite book authors are people like Harper Lee (To Kill a Mockingbird), Herman Melville (Moby Dick), Robert Louis Stevenson (Treasure Island), Lois Lowry (The Giver), and Dr. Seuss (The Butter Battle Book). I love the classics, biographies, adventure, and inspirational or philosophical books. My favorite poets include Maya Angelou, Shel Silverstein, Robert Blake, Robert Frost, and Emily Dickinson. I like poetry that makes me think, or laugh, or even cry.”

Mattie J. T. Stepanek lived and died a child, but he had the spirit and wisdom of an old soul. In his short thirteen years, he became a poet, best-selling author, and peace activist, and his words touched millions of our hearts. Before his death in June 2004, his six volumes of “Heartsongs” poetry have sold more than a million copies. It is my hope that Just Peace, A Message of Hope, will also reach millions of hearts and minds throughout the world.One of my favorite poems of Mattie’s is the one he wrote on the day of the 9-11 tragedy, which appears in his Hope Through Heartsongs, and again in Just Peace, A Message of Hope:

It was a dark day in America.
There was no amazing grace.
Freedom did not ring.
Tragedy attacked sky-high.
Fiery terror reigned.
Structures collapsed.
Red with blood, white with ash,
And out-of-the-sky blue.
As children trust elders,
Citizens find faith in leaders.
But all were blinded,
Shocked by the blasts.
Undefiable outrage.
Undeniable outpouring
Of support, even prayer,
Or at least, moments of silence.
Church and State
Could not be separated.
A horrific blasting of events
With too few happy endings.
Can the children sleep
Safely in their beds tonight?
Can the citizens ever rest
Assured of national security again?
God, please, bless America…
And the rest of our earthly home.

Mattie’s insights into war are shown in this poem which he wrote January 20, 2003:


The Rules of War

The rules of war have changed.
We’ve moved
From battlefields to backyards,
From arrows to anthrax,
From ninjas to nuclear weapons,
From swords to seron gas.
We used to
Fight for a just cause.
Now we
Fight, just because.
We used to win
Hand-to-hand,
Face-to-face.
Now we merely hear of
Children in mass graves
Mingled with the grown-ups
Who were protecting them
And their interests.
We are destroying everything
That we claim to be fighting for.
We can not win
Today’s war with bombs.
We must resolve
Our issues with words.
The rules of war have changed.
How can we choose to continue
Playing this deadly
And impersonal game of loss?


“ I believe that peace becomes possible when we choose to make peace an attitude and a habit. I believe that the reality of peace begins within each of us….”
~Mattie J. T. Stepanek, Just Peace, A Message of Hope

Mattie’s poem to our current president reflects the thoughts and feelings many in our country have. But remember, these thoughts were written by a young boy who had a deep passion to speak out and not remain silent, as too many have.

You said we are caught
Between terrorism and hopelessness.
You said we cannot
Find peace in this situation.
I caught your words, but
I cannot agree with the conclusion.
Clearly,
We cannot perpetuate terrorism.
But perhaps,
If we choose to accept
Hopelessness with a catch,
We will find peace in all situations.
Hope, or lack of hope,
Is an attitude.
And an attitude is a choice.
In this great country,
We do have a choice.
And so, in conclusion,
We cannot get caught
With a bad attitude,
Or we are not choosing peace.


Mattie left us with this beautiful concept of peace, which he wrote May 12, 2002:

~Mattie J. T. Stepanek, May 12, 2002
In Reflections of a Peacemaker: A Portrait Through Heartsongs
(Andrews McMell Publishing, 2005)