It appears butterflies are the most common symbol communicated from our guardian angels or from a loved one who has passed on.  And I believe birds are not far behind.

When I think of butterflies and contact with the other side I always recall Dr. Elizabeth Kübler-Ross’ well known quotation: “Death is simply a shedding of the physical body like the butterfly shedding its cocoon.”

It does seem mystical and magical when, following the recent passing of a loved one, a beautiful butterfly or bird appears before us and catches our attention.  And not only have I had my own mystical experiences but I have often heard those similar stories from friends.  One such story of mine comes to mind.  I had attended the memorial church service of the husband of a dear friend.  Following the service I was invited to their home and as soon as I walked in, she grabbed me by the arm and said, “Linda, you have to see this!”  She took me into her bedroom and to the glass patio door which opened onto an outside upper wooden deck.  A tree grew up not far from the deck.  “There, see that beautiful yellow butterfly.  It has been here all morning, even before I left for the memorial service,” she excitedly told me.  “I just know it is Bill.”  She continued, “Bill and I have spent a lot of time out here on this deck and I’ve never seen a butterfly here before.  Never.”  She and I stood there holding hands for several minutes, watching the flutter of delicate paper thin wings whispering sounds of love through the air.

Have you ever had a bird or a butterfly come to you shortly after the death of your loved one?  It appears to be one way we receive communication from the other side.  Although it could be somewhat subtle most recognize it and know it is a message of love.  I have no explanation how a spirit on the other side, or even an angel, has the ability to change into another form such as a bird or butterfly, or even a being of light, but apparently they can and do.  It is an amazing transformation.  Apparently spirit can either send a beautiful butterfly or an eagle or a dove, or they can transform into one.  What do you think happens?

For those people who I have personally known to have had these kinds of experiences, they have also found comfort and peace as a result of receiving a message in this form.  And I have known their “messenger” to be a dove, a pigeon, a quail, butterfly, or even a chirpy little sparrow.   Or occasionally, only a lone feather.

How do angelic messages come to you?  Do you receive them intuitively, or clairaudiently (clear hearing), clairvoyantly (seeing), or clairsentience (clear sensing)?   Those are a few types of communication.

If one receives a symbol he or she might not understand the meaning of it.  I recall once receiving a relayed message through a woman who often and naturally receives communication from those who have passed recently.  She was giving me a message via symbols and I at first had no understanding of what it meant.  It took me a few minutes to have that light bulb moment when I understood the ball she was describing to me, along with a red bicycle, was a message from an acquaintance who had died in an automobile accident weeks before.  The victim and I had bowled together (the ball) and I recalled a distinct conversation with her about her young daughter learning to ride her red bike.   The real message she wanted to convey to me was a “thank you” for having helped her turn to the light following her tragic and confusing death. I had an emotional contact with her two days following her death.  So to get my attention and that of the medium she used the symbols of the ball and bike.  It got my attention, okay. I almost dropped the fork I was holding when I “got it.”

I’m a big fan of the work of gifted psychic medium John Edward.  He has often talked or wrote of how he sees symbols and he has to interpret that symbol to the best of his ability and pass the meaning on to the person meant to receive the information.  And he admits he might not always interpret what he “sees” correctly but it seems most of the time he does a good job of getting it right.

Symbols can come to us as a vivid picture, in much the way images might appear on a television screen, or simply as visions in the mind.  They do often come as symbols we would personally recognize.  In time our guardian angel might repeatedly use the same symbol to signify a particular item or word, something we’ve become accustomed to understanding the meaning of.

Any time you have the desire to communicate with your angels (and I always include loved ones), ask for a special showing, not only of a vivid symbol of communication, but for the flutter of wings–a special butterfly, a special bird, or a special winged angel.  Why not?

“Listen for the flutter of an angel’s wing as it softly touches
you with love.  Embrace it and join in the dance.”
–Linda Pendleton 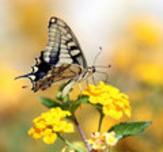 “Angels are spirits, but it is not because they are spirits
that they are angels. They become Angels when they are sent.
For the name Angel refers to their office, not their nature.
You ask the name of this nature, it is spirit;
it is that of an Angel, which is a messenger.”
–Saint Augustine (354-430)