My Tribute to Johnny Cash

I lost a friend September 12th, 2003–a long time friend of nearly fifty years. It was in 1955 when I fell in love with that tall, broad-shouldered man with the unique and incredible bass voice that overflowed with emotion, sadness, joy, love, and laughter. He was the type of man I was always drawn to, a little bit of tough, a lot of charisma, a man who stands up for what he believes in, and with intelligence, spirituality, compassion, humor, and gift of artistry. Johnny Cash was an ENTERTAINER and when he stood upon a stage with his guitar and said, “Hello, I’m Johnny Cash,” you knew you were in for a treat. It has always been so obvious that he enjoyed singing and loved music.

I don’t recall the year of the first time I saw Johnny Cash in concert, but I saw him perform about ten times over the years. Just about every time I did see him I was close enough to see that great sparkle in his eyes and that broad smile. The one time I sat quite a distance from the stage was at the Convention Center in Los Angeles, and that was when he performed with the full Carter family--Mother Maybelle Carter, the Carter sisters–Helen, Anita, and June, Carl Perkins, Statler Brothers, Tennessee Two, and his brother, Tommy Cash. A fabulous show! The last time I saw him in concert was at Bridges Hall of Music, at Claremont Colleges. I sat in the second row, front center. He had just undergone oral surgery, and I believe that was the beginning of his autonomic neuropathy disease as I know he had problems almost immediately following that and it took quite a long time before the doctors arrived at an accurate diagnosis of his declining physical condition.

I followed his career throughout and “went through” his bad times with him. His addiction to uppers and downers, and his seven year battle with that; his accidental setting of a forest fire, for which he was fined; and the rumors that he spent time in prison. He did not. He spend three days in a county jail.

I don’t think I can say this about any other artist, but I have never heard a Johnny Cash song that I didn’t like. His songs are folk, country, gospel, patriotic, romantic, humorous, blues, and rock and roll. There is such an honesty to his music. The click of guitar strings, a rhythm, and never music that overpowers his deep voice or the story he is telling.

The Johnny Cash television show in 1969-1971 was a great show and I hated to see it go. Johnny and his wife, June Carter made a great team. June had said that they were soulmates, and the chemistry that was so evident between them, confirmed that. She was his strength, and he was hers.

Johnny Cash won eleven Grammy’s, has sold more than 50 million records, and recorded more than 1500 songs. It was quite amazing that at the age of 71 he was nominated last month for six MTV Video Awards for his music video “Hurt.” This week he was scheduled to record a new album in Southern California.

After being shunned by the Nashville music industry during the 1980's and into the 1990's, a time when many of the older singers (such as Cash, Willie Nelson, and others) were not having radio air play or albums contracted, Johnny signed with Californian Rick Rubin’s American Records company and his album, “Unchained” won a Grammy in 1998, and an ad in Billboard showed Johnny giving the finger with a caption, “American Recordings and Johnny Cash would like to acknowledge the Nashville music establishment and country radio for your support.” Love it!!

One of my many favorite songs of Johnny Cash is the 1970 recording of “Sunday Morning Coming Down,” a melancholy song written by Kris Kristofferson. Every time I hear the song, it brings tears, but I love it and could listen to it over and over again.

It was so sad to see Johnny recently on the Larry King Show. His health had deteriorated so, a 60 percent loss of eye sight, his diabetic condition, and the effects of his autonomic neuropathy, that had changed a vital man, but did not take away his talent, his love for music.

He is now with his soulmate, his wife, June Carter Cash. And I’m sure Heaven is singing out! God bless, Johnny, and thank you for all you gave us.

“The Man in Black”
How tall he stood upon the stage
He sang his heart out, never stopped by age–
His broad shoulders often held pain–
‘Of course not,’ he said, ‘God was not to blame.’
The world will always enjoy his songs,
His voice brings smiles now that he’s gone,
In our hearts, The Man in Black will live on!
– Linda Pendleton 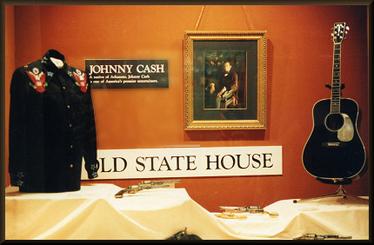 My Tribute to Johnny Cash... 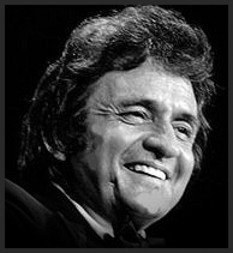