O ancient Tree so gnarled and bold,
How strong you stand, how long you hold,
'gainst bitter winds across your face–
All perils that contest your place–
So much of life that you have seen,
So much of strife where man has been,
From tools of stone to fossiled bones,
You've seen the flames, you've heard the groans;
The Patriarchs have come and gone,
While you, O Tree, have struggled on.
To understand Eternity,
I need but talk with thee, O Tree.
–Linda Pendleton

"Climb the mountains and get their good tidings.
Nature's peace will flow into you as sunshine
flows into trees. The winds will blow their own
freshness into you, and the storms their energy,
while cares will drop off like autumn leaves."
–John Muir 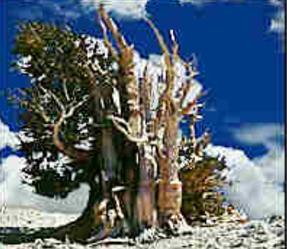 One of my favorite places in California is the eastern side of the Sierra Nevada Mountain range. Over the years I have made many trips from the Southern California area to the High Sierras. There are many beautiful places to visit along U.S. Highway 395 as you leave the desert behind and encounter the majestic Sierra Nevada Mountains, from Lone Pine, to Big Pine, to Bishop, to Mammoth Lakes, Bridgeport and on north to Lake Tahoe.

Since the 1960's, two of my favorite spots to spend time in the summer months have been Convict Lake and Mammoth Lakes areas located north of Bishop, just off U.S. Highway 395. I have spent many, many hours fishing for rainbow and brown trout in the waters of the numerous cold-water mountain lakes and the Owens and Walker Rivers. The area is a fisherman's paradise.

For those who love to hike, it is also a hiker's paradise. The mountains are dotted with lakes, many that have to be hiked into. Campgrounds are in abundance, as are rustic cabins and motels. The snowy winter months bring skiers. There is fine skiing at ski runs such as Mammoth Mountain, June Lake and Lake Tahoe. I have never skied myself but have seen pictures of skiers on Mammoth Mountain and it is said, "Mammoth Mountain is like skiing down the kitchen wall." In other words, straight down! It looks like a challenge even for an experienced skier.

For those wanting a diversion from camping, fishing, hiking, skiing, pines and beautiful skies, there are casinos for those wishing to indulge in a little gambling. Casinos are found on the Nevada side of Lake Tahoe, at Reno and Carson City, Nevada, and in other Nevada towns in close proximity. But even gamblers may find that the flashing lights and ringing bells will only take them away from the beauty of nature for a short time. As the coins drop into the slot machines, your mind will return to the crystal clear lake waters, the aroma of pines, the sound of gentle breezes blowing through the trees, billowy clouds building in the afternoon, and the thousands of sparkling stars that fill the night sky. Nature will call and her beauty and peace will be hard to resist, and before long, you will return to the outdoors and the freshness of Nature.

I had spent many summer vacations in the Sierra Nevada's and had often heard of the nearby White Mountains and the Ancient Bristlecone Pine Forest so decided to visit there one year. It was a side trip I will always remember.

I had left the long Owens Valley and Highway 395 behind at Big Pine–elevation 3,985 feet–and drove on Westgard Pass Road (SR 168), and White Mountain Road, the twenty-five miles or so up into the White Mountains to Schulman Grove and there had an awe-inspiring experience.

The mountain air was fresh and invigorating, though cool at an elevation above 10,000 feet, even on that clear summer day. Inyo National Forest's Ancient Bristlecone Pine Forest covers an area of 28,000 acres. White Mountain Peak rises to a height of 14,242 feet, which is close to the 14,494 feet of Mt. Whitney, the highest point in the contiguous United States.

The White Mountains of California are part of the Great Basin, a 190,000 square mile expanse stretching from the Sierra Nevada Range on the west to the fringes of the Rocky Mountains. Each mountain range within the Great Basin has a linear character and is separated from adjacent ranges, to the east and west, by wide valleys.

I certainly was filled with awe as I walked along the dirt paths at Schulman Grove because I was surrounded by the oldest living things on earth, the Ancient Bristlecone Pines. Some of those pines, with their gnarled and twisted branches and trunks, have for more than 4,600 years fought the harshest of weather conditions to maintain life.

Those trees have experienced every extreme during those thousands of years. Time and time again beyond counting, the cold drenching rains have come down in torrents and slammed against their bodies. The long winter snows have piled high around them, forcing them to struggle heavenward for the warming rays of the sun. Ice storms have burdened their branches, with temperatures so low that the ice stays hard and frozen for long periods, forcing them to wait patiently for the ice to melt and run down across their gnarled bark to the ground to nourish their life-sustaining roots. How often they have stood in the hot sun and felt the rays burning through the thin air, baking their needles and sapping their being of essential energy. There is forever and ever the unrelenting, howling wind that keeps their bodies twisted and bent as they fight to keep their balance, to keep their precious hold on life, at times shuddering to their roots as bolts of lightning shred the air around them.

The struggle to maintain life is never ending and it has gone on day after day, year after year, century after century, and millennium after millennium. And the cycle continues as the tree delights in producing cones with faith that the cone will produce fertilized seeds, that a small speck of their continuing life will dig roots into the sweet earth to begin anew the only thing they know, survival.

It is difficult to imagine that many of those trees have stood on that mountaintop and have struggled so gallantly to maintain life for such time out of mind–since more than 2,600 years before the man called Jesus walked upon this earth. They were here even before Moses stood upon that other mountaintop and heard the words of God. Those trees put down their tenacious roots several hundred years before the birth of Abraham, first of the Jewish patriarchs. Even the 969-year life span of Methuselah, who is said to have lived longer than any human, is short compared to the life span of the Ancient Bristlecone pines which are still going strong.

I was standing there on the mountain with life before me that was older than our written history and I was moved to tears. I wondered what of our history those trees knew. What had they gathered into themselves from the mass consciousness of centuries after centuries of life upon our planet?–if they could only share their knowledge with us, help us to understand who we are, why we are, and if we will continue to be here on this blue planet called Earth. Are they crying out in pain as they see the irreversible damage that we are inflicting upon Mother Earth? I would love to know what they "know" from atop this isolated mountain that seems to be a little closer to heaven.

I had picked up a pine cone from the ground that appeared to have been carelessly cast aside but I then realized that it had not. I held it in the palm of my hand for a few minutes and savored its energy. I then gently returned it to the place where I had found it and I came to understand that it had a plan. It would survive, in any way that it could and in whatever form it may. This small pine cone was part of a family of survivors and it knew its purpose. 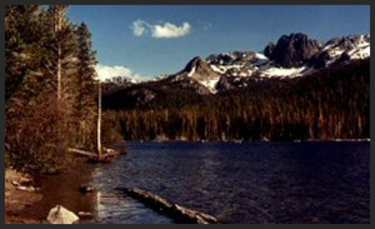