The breathtaking beauty of Sedona, Arizona captures those who are lucky enough to experience the magnificent, natural red rock sandstone formations surrounded by pristine National Forest. Sedona has an intrinsic mystique that radiates from the landscape and many become caught-up in a sense of wonder and awe as they gaze upon it.

Sedona's natural beauty seems to go beyond what pleases the eye. There is an extraordinary energy which permeates the very soul as one experiences the red rock formations which have been sculpted by the forces of nature over eons and eons. Sedona is purportedly home to several vortices–swirling pools of electromagnetic energy that radiate from the earth. The more popular vortexes are Bell Rock, Cathedral Rock, Boynton Canyon, and Airport Hill. These sites in Sedona are said to be similar to various other power spots around the world.

Considered by Native Americans as sacred holy ground long before the arrival of white man, it has been said that warring tribal enemies honored the sacredness of the area and battles were never fought there, although many battles took place in territory surrounding Sedona.

For more than 11,000 years, Northern and Central Arizona has been occupied by people. The Sinagua Indians inhabited the land in and around Sedona and to the north for several hundred years after appearing about 700 A.D. They thrived for several centuries until mysteriously and suddenly disappearing about 1,450 A.D. Their origin is something of a mystery and their somewhat eclectic culture and abrupt disappearance tends to add to the mystery. There are many Sinaguan ruins in the area.

Hollywood chose the Sedona area for the spectacular landscape backdrop in many Western motion pictures filmed during the 1930's through the 1960's. In recent years Sedona has enjoyed millions of tourists from around the world and has become a major Southwest arts center, and is considered by many to be a New Age center.

I hope you enjoy my photographs of the Sedona area.
–Linda Pendleton 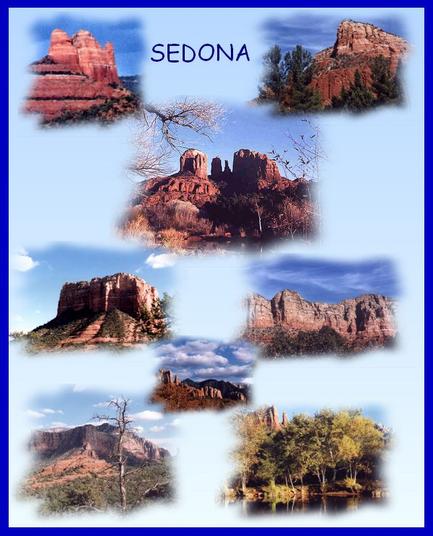 "Linda Pendleton skillfully combines wit with visual artistry through her description of magical Sedona. I think I just caught the Red Rock Fever bug!" ~Athena Demetrios, Author of The Seasoning of A Soul