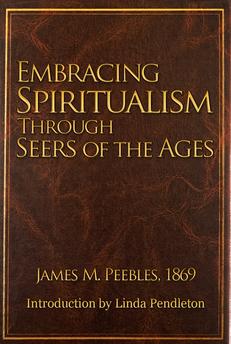 “The ancestors of James Martin Peebles, originally from the ancient town of Peebles in Peebleshire, Scotland, settled in the north of Ireland more than three hundred years ago. Staunch Protestants with very pronounced religious convictions, they endured much persecution during a period of intense and bitter controversies. In 1718, Robert and Sarah Peebles and children, emigrated from Ulster, Ireland to America and settled in Pelham, Massachusetts. Their eldest son, Patrick Peebles, was fifteen at the time. In 1737, Patrick's eldest son, Robert was born in Pelham, Massachusetts. James Martin Peebles' grandfather, Patrick Peebles, son of Robert Peebles, was born about 1770-1772, and by the time Patrick's first son, James Peebles Sr. was born in 1796, the family lived in Whitingham, Vermont.”

“In 1820, James Peebles, Sr., married Whitingham schoolmistress, Nancy Brown, daughter of Deacon Jonas and Lois Brown, and a seventh generation descendant of Thomas Brown, who was living in Concord, Massachusetts as early as 1640. James Peebles Sr. served as a Captain in the Vermont Militia for many years and held various township offices.”

“James Martin Peebles was born March 23, 1822, at the family homestead in Whitingham, Vermont, the second born of eight children of James and Nancy Peebles. The young James excelled as a student and at the age of sixteen entered the Oxford Academy in New York State to continue his studies, majoring in Latin, Greek, and the Classical Literature of the ancient periods. While a student at the Academy he became a teacher, with some of his students even older than himself.”

“At the age of twenty he was ordained a Universalist minister and preached in Kellogsville, Oswego and Elmira, New York; and in Baltimore, Maryland. During this period, a new spiritual movement began to sweep across America and overseas. The Reverend James M. Peebles was one who chose to stand in the bright light of the new Spiritualism.”

“By 1856, Dr. Peebles was preaching Spiritualism at the Free Spiritualist Church in Battle Creek, Michigan. In 1860, he went to Sacramento, California, where he spent nearly two years ministering throughout the gold mine camps in the foothills of the Sierra Nevada Mountains. It was not long until he became known as ‘the spiritual pilgrim’ as he enthusiastically spread his Spiritualists’ philosophy through lectures, writings, and travels around the United States and the world. Himself a medium, he was surrounded by what he called his ‘band of angels’ from whom he received inspiration and spiritual guidance.”

“Aaron Knight was the first of Dr. Peebles’ ‘angels’ or spirit guides to come to his attention. Mr. Knight, the Elucidator, was the spokesman for a group of nine guides, which included Dr. Peebles’ deceased brother, Lorenzo; Mozart, the Spiritual Harmonizer; Madame Elizabeth, the Love-angel and sister of Louis XVI of France; Parasee Lendanta, an Italian scientist; Hosea Ballou, known as the Sermonizer; Caná, known as the Positivist; James Leonard; and John W. Leonard, a clergyman from Edinburgh, Scotland. As Reverend Peebles became more conscious of angel-presence surrounding him, he came to understand his ‘band of angels’ was larger than the aforementioned nine. There were two intertwining bands associated with Dr. Peebles: Chief Powhatan, father of Pocahontas, and known as the Magnetic Cleanser; a Pawnee Chief; two doctors known as the Analyzers; a quaint and witty Irishman; and John, the Beloved, around whom the whole band revolved as planets around their central sun.”

“In 1852, James married Mary Conkey, a teacher in the Clinton Liberal Institute of Clinton, New York. Mary was considered refined, intelligent, well educated. She excelled as a painter and in later years became a spirit artist. The couple lost three children, either through miscarriages or as infants, and in 1861, their adopted son, Louie, died at the age of ten. In 1867, James and Mary bought a large home in Hammonton, New Jersey. Mary maintained the home, most often in the absence of her husband, who for health reason preferred a warmer climate, and who apparently believed the calling of his life's work was more important than maintaining a ‘normal’ married life. Mary died at the Hammonton, New Jersey home in 1909 at eighty-three years of age.”

“James began a study of medicine in his youth, studying with Dr. O. Martin, but it was not until the age of fifty-four that he completed his medical studies at the University of Medicine and Surgery in Philadelphia. He initiated his medical practice in Philadelphia, and soon after had a sanitarium at his home in Hammonton, New Jersey. For several years, Dr. Peebles was a member of the faculty of the Eclectic Medical College, Cincinnati, Ohio, and later served as president of the College of Science in Los Angeles. In 1892, he had a sanitarium in San Antonio, Texas and by 1894 was living and practicing medicine at his health-home sanitarium in San Diego, California. In 1896, he opened a branch sanitarium in Indianapolis, Indiana, under the direction of Dr. John A. Burroughs. During this time, he also published his Temple of Health Journal. In 1902, he founded the Peebles' Institute of Health in Battle Creek, Michigan. Within a short few years, he moved to Los Angeles where he continued medical practice.”

“An international lecturer, prolific and talented author and journalist, Dr. Peebles published more than thirty books and endless newspaper articles and essays during his long lifetime. For many years he was a regular columnist for the Spiritualist paper, The Banner of Light. He journeyed the world five times; the first time in 1865 aboard the Cunarder Persia, and wrote of his adventures within several editions of his book, Around the World. He completed his fifth trip in June 1913, at the age of 91, returning to New York on the Atlantic Transport liner Minnehaha from London, at which time he was interviewed by the New York Times as to the secret of his vitality at 91 years of age. He was probably best known as an author, for his books, Seers of the Ages: Embracing Spiritualism Past and Present, published first in 1869, and followed by several later editions; What is Spiritualism and Who are these Spiritualists?, published in 1903; How to Live a Century and Grow Old Gracefully, published in 1881; and in medical circles for Vaccination, A Curse and a Menace to Personal Liberty, published in 1905.”

“Two authorized biographies of James Martin Peebles were published: the first, Spiritual Pilgrim by J. O. Barrett in 1871, and the second, A Biography of James Martin Peebles by Edward Whipple was published in 1901. In 1870, President Ulysses S. Grant appointed Dr. Peebles to the position of U.S. Counsel at Trebizonde, Turkey, where he served for nearly two years. He was a member of the Congressional American Indian Peace Commission and a delegate to several international peace conferences, and an active and outspoken participant in the anti-slavery, temperance, and women's suffrage movements. Dr. Peebles delivered the first series of Sunday evening lectures on Spiritualism in London, Australia, New Zealand, and Tasmania. He often shared the lecture platform with Garrett Smith, Henry Wright, William Lloyd Garrison, Sojourner Truth, Lucretia Mott, and others. Dr. Peebles was affiliated with the Freemasons; Knight Templars; Odd Fellows; Sons of Temperance; Independent Order of Good Templars; and Theosophy. Several times he toured India with Col. Henry Steel Olcott, who founded Theosophy with H.P. Blavatsky. Dr. Peebles was instrumental in establishing educational facilities in India and Ceylon with Col. Olcott. Dr. Peebles was a fellow of the Anthropological Society, London; the Psychological Society, London; Academy of Arts and Sciences, Naples; and several other societies. He founded the Peebles College of Science and Philosophy in Los Angeles in 1914, the California Centenarian Clubs in 1915, and was president of the California Humanitarian League.”

“James Martin Peebles died in Los Angeles, February 15, 1922, days short of his one hundredth birthday, and at a posthumous centennial birthday banquet celebration held in his honor in Los Angeles, his communication from the other side through a medium and his message from Heaven was reported in a number of major newspapers across the country, and elsewhere, including the Los Angeles Times and the New York Times. Dr. Peebles' communication with those of us on Earth has continued since that time.”
-Linda Pendleton
© Copyright 2002, 2006, 2015 by Linda Pendleton, All Rights Reserved.  Do not copy, post, or use in any way, without the permission of Linda Pendleton. 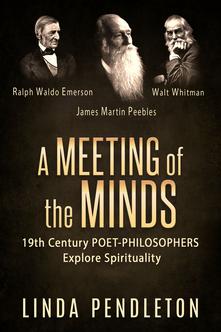 Dr. James Martin Peebles (1822-1922) was a leading American Spiritualist, prolific author, poet, clergyman, and physician. His literary endeavors and world travels allowed him an opportunity to meet many people within prestigious literary, philosophical, and religious/spiritualists circles. He authored many books on Spiritualism, and about his world travels, throughout his long lifetime.  In his classic book, Seers of the Ages, Embracing Spiritualism, which enjoyed many editions and translations, he examines the history of religion and spirituality, with emphasizes on spirit communication, ancient religions and doctrines, philosophy, eternal life, spirit guides and angels. 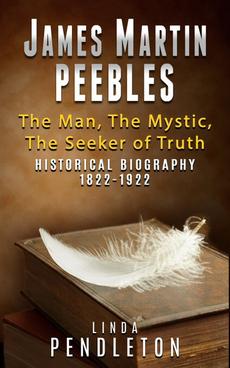 Poetry is a bridge between the physical and spiritual worlds.  The 19th century was an age of artistic renewal, rich in philosophy, poetry, and literature and it was at mid-19th century when Spiritualism came into the forefront and flourished in America and worldwide.  Varied beliefs and practices grew from the conviction that the living and the dead could communicate.  Although much of the literature of ancient days spoke to the idea that there is an afterlife—a continuing life-cycle— during this period of the 19th century the belief became more pronounced and was very much a part of the writings and social activities of many in literary circles.   Dr. Peebles wrote of the spiritual expressions of his friends and colleagues such as Walt Whitman, Emerson, Elizabeth Barrett Browning, Longfellow, and a number of other well known gifted men and women.  Within A Meeting of the Minds, we have the words of those who have enriched us with their sensitive understanding of the wonders and beauty of life.

A compelling historical biography of an extraordinary man, James Martin Peebles, an intellectual, reformer, physician, author, who, with his remarkable achievements and his fascinating life story is a testament to the connection between creativity, freedom of thought, and humanity, all embraced and overshadowed by the world of spirit. Born in 1822 in Vermont, James died in Los Angeles in 1922, 36 days short of a century. At the age of sixteen, he taught school, and at twenty was ordained as a Universalist minister, but a restlessness moved him to search for more. As Spiritualism began to sweep the country and Europe by 1850, James became a celebrated Spiritualist. He traveled broadly, lecturing all over America, and made five trips around the world, spending extended time in Europe, Australia, and Asia. Despite pacifist beliefs, he served in the Union army during the Civil War, was appointed consul to Trebizond, Turkey by President Ulysses Grant, served on the Indian Peace Commission, and was an abolitionist and suffragist. Knowing there was more to learn about the final years of Dr. Peebles’ life, Linda Pendleton continued research that was begun from the time she and her husband Don Pendleton wrote the 1990 book, To Dance With Angels, An Amazing Journey to the Heart With the Phenomenal Thomas Jacobson and the Grand Spirit Dr. Peebles, and her follow-up book, Three Principles of Angelic Wisdom. 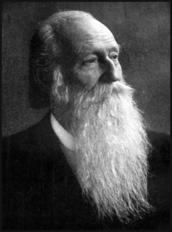 Our Interview with a Man Who Knew Dr. James Martin Peebles