The True Meaning of Words and Pictures

It was in the early summer nearly sixteen years ago when I had the wonderful opportunity to meet Charles Schulz at the Santa Barbara Writers' Conference. At the time that I discovered he was scheduled to speak I wondered why a cartoonist would be at a writer's conference. In my naiveté, I considered him only to be a man who drew cartoon figures and gave no thought to the fact that he also had to bring forward the trials and tribulations of Charlie Brown and gang with artful words, not only with cartoon drawings.

What an honor it was to hear him speak. His manner was unassuming, almost modest; bright not only with his mind but with his persona. He was delightful! He revealed a part of himself, which gave additional insight into the stories he created with his Peanuts characters. Obviously, a part of his world view came through in his comic strips.

I've personally found the Peanuts comic strip over the decades to not only be filled with humor but with so much more. It brought out the "child" in all of us, and often would take us back to our own early memories. But it also gave us food for thought in our adult world. He was brilliant in the portrayal of his characters.

A few years later, I was to learn more about the challenges of the craft of comic script writing when I adapted novels to comic book format. I must say, it gave me a lot of respect for this creative art form. And at that time, I recalled my questioning of a cartoonist taking part in a writers' conference. It gave me a good chuckle.

I live in the beautiful Red Rock Country of Sedona, Arizona, and can gaze out my window and see Snoopy lying on his back, looking up to the cerulean sky. I don't know when the sandstone red rock formation was dubbed Snoopy. I do know that nearly everybody who visits Sedona recognizes Snoopy's profile. It seems now that you can almost hear Snoopy say with sadness, "We'll all miss you, Sparky."

The Peanuts comic strip will be as long lasting as Sedona's sandstone Snoopy rock formation. Time will not erase them.

And aren't we lucky that Sparky brought his inner-world into the outer-world for all of us to share in?!

A Tribute to Charles "Sparky" Schulz 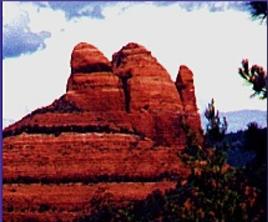